Go to your local market

See you at H22 this summer!

H22 - "The making of a smarter city" is Helsingborg's major welfare initiative, where the city of Helsingborg develops the solutions of tomorrow, contributing to an increased quality of life in a smarter, sustainable city. Danfo is participating in the initiative and have, together with the City of Helsingborg, developed two family restrooms that will be shown for the first time in connection to the fair. We will also host a conference to highlight the opportunities for collaboration on product development and urban planning to create inclusive and safe public environments.

With children as a reference
In interviews with children, the City of Helsingborg identified children's needs and wishes. These have been the starting point for the development and design of the toilets. Both the interior and exterior of the toilets have been given a unique look, and the design has been adapted to the area in which they will be placed. In Fredriksdal, the toilet has a dinosaur theme, while the toilet in Dockanparken has been zebra-patterned. The visitors needs as well as experience have been central and in addition to function, we work with elements such as sound, light and image for a unique impression. 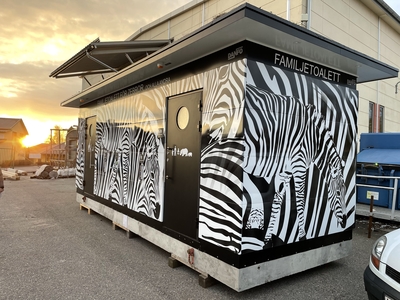 New technology as support
During the fair, we will, among other things, interview visitors of the restrooms to keep gaining important insights for the product's continued development. We will also use the toilet buildings in Helsingborg as a test bed for new technology where we try new ways to solve challenges and needs that are identified in dialogue with the users. Furthermore, we plan to deepen the dialogue with both existing and potential partners to continue the journey towards shaping the public toilet of the future.

See you at H22 this summer!

Helsingborg - an innovation center
In 2020, Helsingborg was named one of Europe's most innovative cities. It is an award given by the European Commission to the European city that best demonstrates its ability to use innovation to improve the quality of life for its inhabitants. Helsingborg has a proud tradition of arranging large fairs. In 1955, a million people came to the H55 craft and design fair. In 1999, H99 became the forerunner of several other housing fairs in the country. Through H22, Helsingborg takes the tradition to the next level and focuses on an issue that over time has become increasingly important. H22 City Expo showcases the journey towards a smarter, more caring, and sustainable city.

At H22 City Expo, Helsingborg brings together over 70 partners, innovators, world-leading companies, administrations, sustainability heroes, associations, and residents to explore and develop tomorrow's city life. For a full 35 days in the summer of 2022, you will be able to experience the latest innovations and the smartest ideas in a city that puts people and the planet first. More info about H22 can be found here.